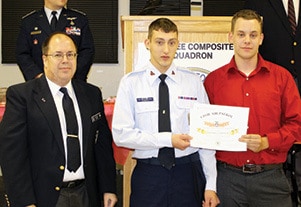 Joshua Lambeth, a senior at the Nashville Community High School and a cadet in the Civil Air Patrol (CAP), was awarded with the Civil Air Patrol Certificate of Recognition for Lifesaving Award on Dec. 6 during the Shawnee Composite Squadron’s annual banquet held in Marion.

Lambeth, a member of the Shawnee composite Squadron based in Herrin, was recognized with this distinct honor after his selfless actions and disregard for his own safety saved the life of Nathan Wroblewski, a 23-year-old from Florissant, Mo. Nathan was critically injured after being involved in a major accident in July of 2014.

Cadet Lambeth’s actions have been directly credited by the local law enforcement, EMS personnel, hospital staff, and by Nathan and his family as saving Nathan’s life.

Cadet Lambeth was presented the award by Nathan Wroblewski and Lieutenant Colonel Paul Hertel, the Illinois Wing Chief of Staff.

Civil Air Patrol, the officialy auxiliary of the U.S. Air Force, is a non-profit organization with 61,000 members nationwide, operating a fleet of 550 aircraft. CAP, in its Air Force auxiliary role, performs 90 percent of continental U.S. inland search and rescue missions as tasked by the Air Force Rescue Coordination Center and is credited by the AFRCC with saving an average of 80 lives annually.

Its volunteers also perform homeland security, disaster relief and drug interdiction missions at the request of federal, state and local agencies. The members play a leading role in aerospace education and serve as mentors to more than 26,000 young people currently participating in the CAP cadet programs.

CAP received the world Peace Prize in 2011, the congressional Gold Medal in 2014, and has been performing missions for America for 71 years. CAP also participates in Wreaths Across America, an initiative to remember, honor and teach about the sacrifices of U.S. military veterans.

Membership in the Civil Air Patrol is open to everyone ages 12 and up. Visit www.gocivilairpatrol.com or www.capvolunteernow.com for more information. Or, contact Major Wesley Flannell at (618) 926-2364, commander @shawneecap.org.

Joshua Lambeth was honored with the Civil Air Patrol Certificate of Recognition for Lifesaving Award earlier this month. He is shown here with Nathan Wroblewski and Lieutenant Colonel Paul Hertel, the Illinois Wing Chief of Staff.