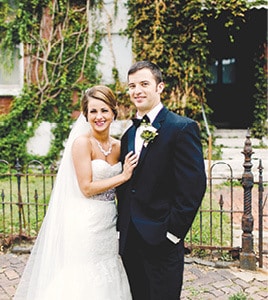 Katy Lynn Alms and Timothy Bryan Birckhead were united in marriage on Saturday, October 11 at the Mad Art Gallery in St. Louis.

Katy is the daughter of Ken and Sandy Lintker of Venedy and Neal Alms of Coulterville.

Tim is the son of Pam Birckhead of Columbia, IL and Don Birckhead and Sandy Vaughn of Crestwood, MO.

Katy is a 2007 graduate of Nashville High School and will graduate May 2015 from the Veterinary Tech Institute at Hickey College in St. Louis.

Tim is a 2004 graduate of Columbia High School and a 2008 graduate of Missouri State University with a Bachelor’s degree in Criminal Justice. Tim is a police officer for the city of Fairview Heights.

The couple resides in Columbia.