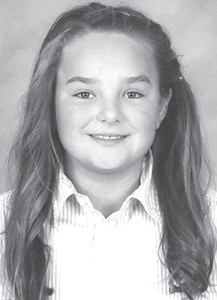 Miss Piper Jennifer Gutzler of Nashville, along with her parents Marty and Kimberly, departed this life on Friday, January 2, 2015 at 6:15 p.m. due to an aviation accident near Eddyville, Ky. She had attained the age of nine years, eight months and 22 days.

Piper was born on April 11, 2005 in Belleville, the daughter of Marty and Kimberly (Lane) Gutzler.

Piper was a 4th grade student at Nashville District 49 Primary School in Nashville. She loved all sports, especially soccer, basketball and softball. She enjoyed going to the beach and being with family.

In addition to her parents, she was preceded in death by her paternal grandmother, Betty Gutzler; aunt, Jennifer Gutzler and her cousin, Sierra Wilder.

Private funeral services for family and close friends will be held at the Trinity Lutheran Church in Nashville on Friday, January 9 at 11 a.m. with Pastor Matthew Wietfeldt officiating. After the services cremation will be performed and interment of ashes will be at a later date.