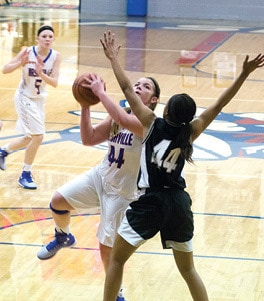 Despite allowing Carbondale to control the pace of the game, the Nashville Hornettes found a way to win.

Three Hornettes scored in double figures, and Nashville defended the home court with a 55-46 win over the Lady Terriers last Tuesday.

“It wasn’t the pace we wanted,” Nashville coach Wayne Harre said after the game. “We let things get a little to spread out at times, and we don’t like to play like that.”

Jordi Harre poured in 21 points to pace her squad, and Janie Holle and Karly Stanowski finished with ten points apiece to help the Hornettes hold off Carbondale.

“When you play like that, there are going to be a lot of possessions, so we had to have someone else step up,” Wayne Harre said. “Janie and Karly did a good job inside, and that was big for us.”

Nashville led for most of the first half, but the Lady Terriers battled back in the third quarter to take the lead.

Trailing by one point early in the fourth quarter, the Hornettes’ got a pair of free throws from Emily Thompson to give them a 43-42 lead. Jordi Harre followed that up with a big three coming after a time out, and Nashville never trailed again.

For More, Please Read The January 14 Edition Of The Nashville News.

Nashville Karly Stanowski puts up a shot in the lane during the Hornettes’ win over Carbondale last week.