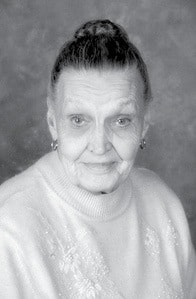 She was born October 22, 1919 in Mound City, daughter of Edward Stephen Schuler and Edith (Reno) Schuler. She married Frank M. Gassaway on July 4, 1938 and they later divorced.

She was preceded in death by her parents, a daughter, Roxanne Handley and a son-in-law, James Handley.

Gladys attended Lowell Grade School in Mound City and graduated in the class of 1937 from Mound City Community High School. She took one semester of credits from Southern Illinois University Carbondale. She worked for many years at the Brown Shoe Company in Burkarts in Cairo. In 1962 she moved to Carbondale to work on the Southern Illinois University campus as a Student Payroll Clerk eventually becoming the Chief Clerk of Student Payroll. Gladys loved the students that she helped along the way. She received the university’s highest honor when she was named Employee of the Year. She spent 30 plus years serving the students at Payroll. She was an active member of her Lunch Bunch on campus. Her last move was in 1994 to Centralia to be near her daughters and grandchildren. She was a member of St. Mary’s Catholic Church in Centralia. She enjoyed helping at St. Mary’s School to add scores for the annual science fair, clipping coupons and supervising students in the computer lab. Her Monday night bible study class was a must.

Gladys had a green thumb and her yard was always full of beautiful flowers. She was an excellent baker and candy maker. Anyone who ate her various candies always raved about them. She also knitted constantly. She was an avid bingo and pinochle player and played with a vengeance well into her nineties.

Gladys was a devoted mother, a loving grandmother, and a friend of all. She will be missed by the many people she met along her life’s journey.

Mass of Christian Burial will be held Friday at 10:30 a.m. at the St. Mary’s Church in Centralia with Father Dale Maxfield officiating. Visitation will be held Friday at the church from 9:30 a.m. until the time of service. Private interment will be held at St. Mary’s Cemetery in Mounds at a later date. In lieu of flowers, memorial donations may be made to St. Mary’s School or to the House of Hope and will be accepted at Sutherland-Garnier Funeral Home in Centralia, which is assisting the Gassaway family. Online condolences may be made to the family by visiting www.sutherlandfuneralhome.com.