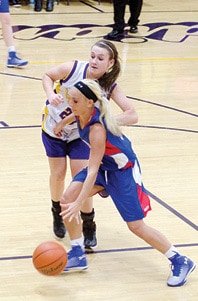 A big game from Jordi Harre helped the Nashville Hornettes advance in the Highland Tournament.

Harre poured in 23 points to lead her team to a 42-36 win over Triad, setting up a second round game against Belleville-West in the championship bracket of the event.

After shutting out the Lady Knights in the second quarter, the Hornets held off Triad in the final period thanks in part to 11 points from Harre and enough free throws to prevail.

The Hornettes were short-handed in the game with Emily Thompson on the shelf after an injury in the previous game.

Nashville roughed up Carlyle 54-25 last Thursday for the Hornettes’ 15th win on the season.

Emily Thompson drives down the lane during the Hornettes’ win at Carlyle last week.