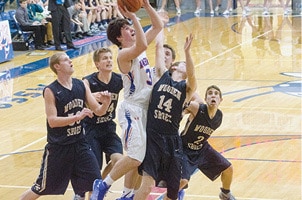 Two of the top teams in the state met on the first night of the Nashville Invitational, and it was the Teutopolis Wooden Shoes coming out on the winning end of a 46-42 score.

Nashville came into the tournament as the top-ranked team in 2A, but it was the third-ranked Wooden Shoes earning the nod in a game with postseason atmosphere.

Despite his team losing for the first time in over a month, Nashville coach Brad Weathers said this kind of loss can be instructive.

“You can’t not improve coming through a tournament like this,” Weathers said of the top-flight competition in the field. “The competition is tremendous, and its going to be a long week of good basketball.”

The Hornets worked the ball inside to sprint out to an early 10-3 lead, with big men Hunter Cooper and Royce Newman getting to the basket to score. But the relentless man-to-man defense from T-town allowed the Wooden Shoes to battle back and take the lead midway through the second quarter.

Brady Bultman knocked down a triple to make it a 13-6 game with about three minutes to play in the first quarter. That would be the last points the Hornets would score for almost an entire quarter, as T-town clamped down the defensive pressure and reeled off 15 unanswered points to go ahead.

“You’ve got to give credit to T-town’s defense,” Weathers said. “They are as physical a team as we’ve played this year.”