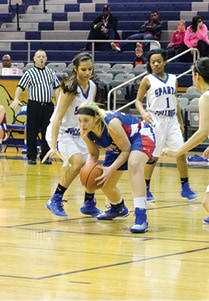 The last time the Nashville Hornettes lost a game in River-to-River Conference action, most of this year’s teams players were in grade school.

After 94 straight River-to-River Conference wins, the Hornettes fell to a league opponent for the first time Thursday at Carterville. The Lady Lions took advantage of a banged up Hornette squad, winning 40-32.

With top scorer Jordi Harre playing on a broken toe and sophomore post player Janie Holle unable to go, the Hornettes simply did not have enough firepower to win on the road against a tough Carterville squad. Harre still managed 16 points in the ballgame despite being hobbled.

Nashville trailed for most of the game but hung around. Karly Stanowski converted a traditional three-point play early in the fourth quarter to give the Hornettes their only lead of the game, but the Lady Lions’ defense did not allow another point until the final minute.

Stanowski and Paige Kasten finished with six points apiece in the loss.

Nashville coach Wayne Harre’s teams have not lost many SIRR Conference games during his 15 year tenure. Sparta was the last team to beat the Hornettes in 2006.

Though it was the last team to beat Nashville in conference play almost a decade ago, the Hornettes had not problem taking down Sparta last Tuesday by a score of 58-11.

Nashville never trailed in the game, outscoring the Lady Bulldogs 18-4 in the first quarter. Harre knocked down a three to start the game, Emily Thompson converted a bucket and bruise into three points, and Stanowski scored twice during the run.

It only got worse for the home team, as Kasten drained a pair of three’s before halftime and two more in the third quarter to help make it a laugher.

Three Hornettes finished in double figures in scoring, with Harre’s 13 points pacing the group. Kasten scored a dozen of her own, and Stanowski added 11 more for Nashville.

A Satuday matinee showdown with Mater Dei went against the home team, as Nashville fell to the Lady Knights 34-26 in overtime.

The Hornettes trailed heading into the fourth quarter, but Harre scored seven of her team-high nine points in the final frame to help her squad knot the score at 26-26 at the final buzzer.

But Nashville was unable to score in the free period, and MD was a perfect 8-for-8 from the free throw line to beat the Hornettes.

Stanowski scored eight points in the game, and Thompson, Kasten and Mackenzie McFeron each chipped in three points for Nashville.

Nashville (17-8) earned the top seed in next week’s Red Bud Regional. Chester and Sparta will play Monday night, and the Hornettes will face the winner on Tuesday. The championship game will be played next Thursday night.

Janie Holle comes up with a loos ball during the Hornettes’ win at Sparta last week.