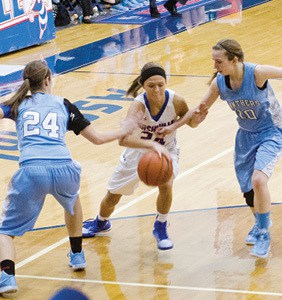 It was an emotional night for the Nashville Hornettes’ coach Wayne Harre last Tuesday, and only part of it was due to Nashville’s surprisingly close win over Pinckneyville.

Harre’s daughter Jordi was among the seniors honored prior to the game, and that added an extra layer to a tough, 28-26 win over the Lady Panthers.

“It was a tough one for me, and I lost it before the game,” Harre said. “It’s special for me with Jordi on the team, and Emily (Thompson) and her have been friends for a long time, and Rachel (Reid) has been with them since grade school.”

Harre said he was overtaken by memories during the game.

“We’ve been through so much together,” he said of his time with his daughter, both in basketball and softball. “You win two state championships and get to state a couple of other times, you just can’t dream something like that, and it all goes through your mind.”

For her part, Jordi Harre was surprised to see the emotion from her father.

For More, Read The February 11, Edition Of The Nashville News