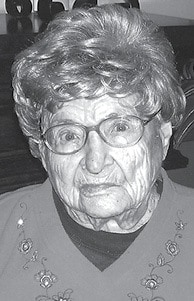 Mrs. Michlena “Lena” F. Lupa of Nashville departed this life at the Washington County Hospital Extended Care in Nashville, on Sunday, April 12, 2015 at 4:55 p.m. She had attained the age of 107 years, six months and 26 days.

Mrs. Lupa was born on September 16, 1907 in Ashley, the daughter of Michael and Frances (Paszkiewicz) Pierjok. She was united in marriage to Boleslaw “Bill” Lupa on November 14, 1942 in Madison, and he preceded her in death on March 29, 1988.

Left to mourn her passing is her daughter, Willene Bergkoetter and her husband Eugene of South Roxana; a brother, Stanley Pierjok of Nashville; a grandson, Justin Hamilton and his fiancée Katie Dowell; nieces, nephews, other relatives and friends.

Funeral services will be held at the Campagna Funeral Home in Nashville on Wednesday, April 15 at 11 A.M. with Fr. Peter Augustine officiating and with internment to follow in the St. Ann Cemetery in Nashville.

Should friends desire mass offerings or memorial contributions may be made to the St. Ann Lobby/Restroom Renovation Fund or the Alzheimer’s Association and will be accepted by the Campagna Funeral Home.