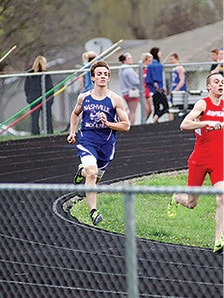 It has been a rainy start to spring, and Nashville’s track and field athletes have had limited opportunities to compete. Last Wednesday, Nashville hosted a meet that was abruptly cancelled due to storms in the area after the 3,200-meter relay. Jordan Love is shown here running the final leg of the event prior to the cancellation.

The Hornets and Hornettes will try to go again this week. The boys team is scheduled to compete at the Herrin Invitational Wednesday, with the freshmen and sophomore athletes getting some work Saturday at the Central F/S Invitational in Breese. The Nashville Invitational is scheduled for Tuesday.

On the girls’ side, the Hornettes were scheduled to compete at Pinckneyville Thursday before Saturday’s Central F/S Invitational. Next Tuesday is the Mascoutah Invitational.

Looking ahead to the rest of April, both the Hornets and Hornettes will compete in the Greenville Relays April 24 and the Central Tri-County Invitational April 27. The girls Nashville Invitational is slated for April 30.