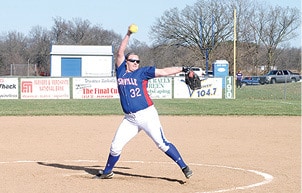 The Nashville Hornettes have been doing it all this spring, and that trend continued last week when they won three times to keep their perfect season alive.

Dominant pitching and an explosive offense were on display last week, as Nashville outscored opponents 30-1 in beating Belleville-West, Okawville and Pinckneyville.

Nashville wasted no time in setting the tone for the game, plating four runs in the first inning. Brooke Burcham hit a two-run double, and Emily Thompson and Alli Liske each drove in runs to stake the Hornettes to an early lead.

Those four runs would be enough for Ingram, who struck out six in five innings of work for the win.

Thompson homered and Jordan Stiegman cleared the bases with a three-run triple in the Hornettes’ five-run fourth inning.

Stiegman and Thompson each finished the day with three RBI, and Jordi Harre, Burcham, Karly Stanowski and Liske had multi-hit games.

Another dominant pitching performance, this time by Diedra Holzhauer, lifted Nashville to a 10-0 win over Okawville Thursday.

Mackenzie McFeron homered in the first inning, and the Hornettes scored three runs in the third, fourth and fifth innings to put away the Lady Rockets.

Holzhauer scattered two hits over five inning while striking out five to earn the win. She also drove in a pair of runs.

McFeron had a big day at the plate, finishing 4-for-4 with a home fun, two RBI and three runs scored. Thompson had two hits, Burcham drove in two runs and Stanowski knocked in one more.

Nashville picked off a River-to-River Conference rival with a 7-0 win over Pinckneyville Monday.

Ingram handled the Lady Panthers’ offense with ease, striking out 13 over seven innings while giving up just three hits to earn the shutout win.

The Hornettes’ got on track in the third when Thompson cranked a three-run homer for the first runs of the game. Holzhauer hit a three-run bomb of her own in the fifth to help put the game away.

Stiegman, Burcham, and Harre also had hits for Nashville.

The Hornettes were at Gibault Tuesday and host Woodlawn Wednesday before their showdown with Carterville Thursday. The two teams were tied 3-3 in the bottom of the ninth last week when the game was called due to darkness after a rain delay. The game will pick up in the bottom of the ninth with the Lady Lions batting. Once that game is decided, the two teams will play again with the Hornettes as the home team, and the outcome could determine the conference champion.

Maci Ingram has been lights out all season in the pitcher’s circle for the Hornettes.