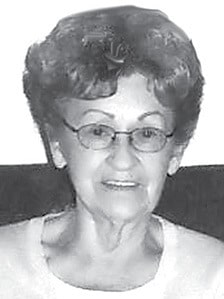 Mrs. Margaret Malick of Nashville departed this life at Washington County Hospital in Nashville on Monday, May 25, 2015 at 11:05 a.m. She had attained the age of 85 years, 11 months and ten days.

Mrs. Malick was born on June 15, 1929 in Washington County, the daughter of Leo and Mammie Chwascinski. She was united in marriage to George A. Malick on May 8, 1948 at St. Michael Catholic Church in Radom, and he preceded her in death on January 12, 2010.

Margaret was a homemaker and a member of St. Ann Catholic Church in Nashville. Margaret loved her family and grandchildren. She enjoyed spending time with them.

She was preceded in death by her parents, husband and her son, Randy Malick

Mass of Christian Burial was held at St. Ann Catholic Church in Nashville on Thursday, May 28 with Fr. Andy Knopik officiating. Interment was in the St. Michael Cemetery in Radom.

Should friends desire Mass offerings or memorials may be made to the St. Ann Lobby Renovation Fund and will be accepted by the Campagna Funeral Home.