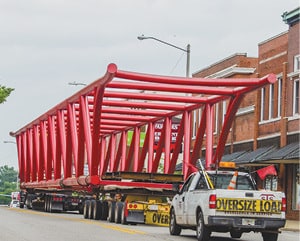 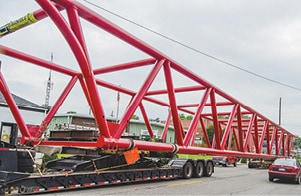 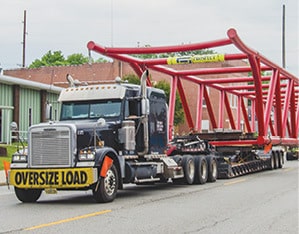 A behemoth creaked slowly made its way east on State Route 15 in Nashville on the afternoon of Thursday, June 4. This particular giant was a huge metal frame loaded onto a truck with “wide load” signs, accompanied by two chase cars with flashing lights and one state police officer as well.

Chris Reynolds, the logistics manager at Lexicon, Inc., a company which Prospect Steel, the manufacturer of the item is a division of, shed some light on what the item being shipped was.

“It’s a pedestrian bridge,” said Reynolds, who was located in Little Rock, Ark., where the load started its journey.

The item is 160 feet long (necessitating two separated trailers to move it). It is 17 feet, three inches wide and 15 feet, two inches tall.

The dimensions and escort required to move the bridge means that the driver must avoid the Interstates, because the bridges are not tall enough. Reynolds said the bridge was bound for Torrence Avenue in South Chicago.

The vehicle is moving at an average of 12 miles per hour, and can only move during daylight hours on weekdays.

Reynolds said that the bridge was estimated to arrive at its destination late Tuesday night or early Wednesday morning, but when the item being moved was as large as this, things could change depending on a number of different factors.