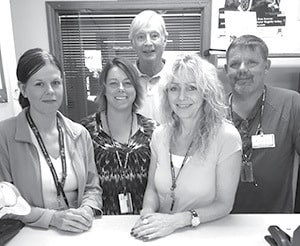 Illinois Secretary of State Jesse White’s Inspector General Jim Burns visited the Nashville Driver Services Facility to update employees and the public on the office’s Safe ID Task Force. In 2009, White appointed Burns to head the Safe ID Task Force as a proactive effort to protect the public and the integrity of the driver’s license (DL) and identification (ID) card system. The Task Force continues to be an effective countermeasure to identity theft as well as the fraudulent procurement or use of real or counterfeited DLs and IDs.

“The goals of the Task Force remain the same: identify, target and eradicate fraud associated with the illegal production or misuse of driver licenses and identification cards,” said White. “Although I am pleased with the work of the Task Force to date, we must continue to develop and implement preventative safeguards that combat illegal activities.”

“We understand that there will always be a criminal element trying to beat the system,” said Burns. “It is our job to try and stay one step ahead of their illegal efforts, and the Safe ID Task Force will continue to look at adopting and implementing changes to do just that.”

The Safe ID Task Force is comprised of representatives from various Secretary of State Departments, including the Office of the Inspector General, Secretary of State Police, Drivers and Vehicles Services, General Counsel and Department of Information Technology. In addition, the Task Force works with a variety of local, state and federal agencies.

The Safe ID Task Force has not only launched innovative efforts to better identify potential patterns of wrong doing, but has recommended policy and procedural changes over recent years which the Secretary of State’s office has adopted.

For example, one recent initiative implemented data mining, which enables the Task Force to identify patterns of questionable or illegal activity that otherwise might go unnoticed. While relatively new, data mining has proven to be helpful to the Secretary of State in protecting the personal information provided by the public as well as safeguarding the integrity of the drivers’ license system.

In addition, the Secretary of State’s office implemented changes recommended by the Task Force that tighten up the residency requirement when obtaining a DL or ID for the first time, or making a change to an existing DL or ID. The residency documents that are now acceptable can be quickly verified during a transaction. Moreover, individuals must provide two acceptable documents, rather than one, that contain their residence address. The office no longer accepts personal mail as proof of address. For a complete list of acceptable residency documents, visit www.cyberdriveillinois.com.

Another important change recommended by the Task Force enables the Secretary of State’s office to require an individual to visit a facility within 30 days or less when there is good cause to believe a DL or ID has been issued based on invalid, fictitious or fraudulent documents. If the individual fails to show within the allotted time frame, his or her DL or ID will be cancelled.

The Task Force recommendations also led to the statewide expansion of the automated Rules of the Road testing program. Under automated testing, computerized systems choose randomly among a large pool of questions, and change the order in which multiple choice answers appear. This greatly reduces the ability of applicants to memorize mnemonic patterns of questions and answers. The computer-based Rules of the Road testing system also allows tests to be updated as laws change, reducing costs and waste of reprinting paper-based tests.

High school driver education instructors and students benefit from the expanded automated testing system as well. Testing in the classrooms will be offered on a web-based testing system, replacing paper-based testing. As a result, test results are available to the Secretary of State’s office immediately, which reduces paperwork for driver education instructors and expedites the process.

Burns also stressed the importance of visiting facilities and meeting with employees and the public. His Inspectors are assigned facilities to visit which helps to build a level of trust while also demonstrating an active presence.

“Visiting facilities throughout the state demonstrates to employees and the public that the Inspector General’s office is vigilant yet accessible,” said Burns. “The employees know they can come to us with a complaint, and that we will do a professional job investigating the complaint.”

White and Burns encourage reporting of any perceived misconduct through the Office of the Inspector General’s website, ReportItNow.net. The website allows the public and office employees to file complaints of suspected illegal or unethical activities. Complaints may also be directed to the Inspector General hotline at 217-785-2012.

The office also publishes the IG Report, a newsletter distributed to office employees several times a year to communicate new initiatives as well as to serve as a constant deterrent to wrongdoing.

“The efforts of Secretary White and the Office of the Inspector General continue to foster an environment conducive to excellent customer service while simultaneously deterring and thwarting unethical or unprofessional behavior,” said Burns.