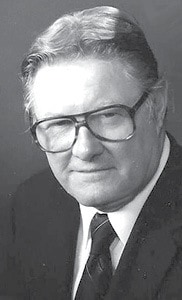 John J. Barr, Sr., of Nashville passed away peacefully at Friendship Manor Healthcare Center in Nashville on Monday, August 3, 2015 at 11:10 a.m. He had attained the age of 93 years, five months and four days.

John was born on February 26, 1922 in Marshall, Mo., the son of Robert L. Barr and Frances Amelia (Millie) Weis-Barr.

John enlisted in the United States Navy soon after his high school graduation and served in World War II. He was united in marriage to Vera Ruth Mangis on April 29, 1950 in Oklahoma City, Okla. They shared 56 years of marriage until Ruth was called home to heaven on May 14, 2006. Together, John and Ruth had three children, John, Mike and Becky.

John moved to Nashville in 1953. He sold insurance for many years. In 1969, he started Bi-County Disposal Service. He was a founding member of the Nashville Jaycees. John and his good friend, Jack Lane, were instrumental in bringing football to Nashville Community High School. John relished his duties as a member of the “Chain Gang” at the home football games for many years. John loved to go to auctions and flea markets. The adage “one man’s junk is another man’s treasure” was his motto.

Mass of Christian burial will be held at St. Ann Catholic Church in Nashville on Saturday, August 8 at 1 p.m. with Fr. Andy Knopik officiating and with interment to follow in the Greenwood Cemetery in Nashville.

Friends may call at the St. Ann Catholic Church in Nashville on Saturday from 12 p.m. until the service hour.

Should friends desire, Mass offerings or memorials may be made to the St. Ann Catholic School or the Nashville Sports Boosters and will be accepted by the Campagna Funeral Home, in charge of arrangements.