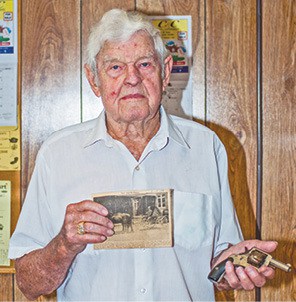 Vernon Nagel of Nashville visited the Nashville News with an antique revolver and a May 18, 1939 newspaper clipping about its owner, Dr. A. E. Michael, a New Minden veterinarian who once served the area.

The newspaper clipping Nagel showed had a picture of Dr. Michael in his buggy drawn by two horses, Baby Ruth and Kitty Muldoon, who it states were descendants of Star Pointer, the first horse to run a mile in less than two minutes in the U.S.

The horses drove Michael all around the county, and in those days when the use of automobiles was on the rise, motorists told Michael that they had to go as fast as 35 miles an hour to be able to pass him on country roads.

Nagel says Michael always carried the handgun, a .32 caliber H&R revolver, but that he only ever used if he needed to put down an injured or ailing animal.

For More, Please Read The August 19, 2015 Edition Of The Nashville News

Vernon Nagel holds a 1939 newspaper clipping about veterinarian Dr. A. E. Michael, and a pistol once owned by the doctor.