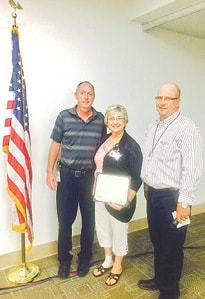 Majo Bates, Supervisor of NASDA for Southern Illinois, which includes Jefferson County, has received her 25 year service award. She began her service with NASDA in February of 1990. Awards are given in May or August of each fiscal year. Majo received her award at the recent CEAP training held at the NOC in St. Louis, MO on August 11-13.

In photo left to right are: Harvey Roemer of Springfield, the NASS/NASDA coordinator for Illinois, Majo Bates of Irvington, Supervisor of Southern Illinois, NASDA, (National Association of State Departments of Agriculture) and Doug Hartwig, Director of the new NOC, Heartland Region for NASS in St. Louis, Missouri for both MO & IL.

Enumerators working in Southern Illinois are: