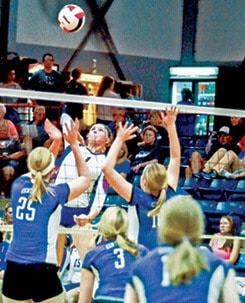 The Nashville volleyball team got there home schedule underway when they took on Clinton County foe Breese Central at Assembly Hall on Thursday September 3. The Hornettes started off slow in the match falling down early by as many as 8 in the first match. The Hornettes would continue to struggle as the match went on eventually losing the match 25-11.

“ We made way to many errors, got down 7 or 8 to 1 whatever it was and that's too big a hill to climb”, said Coach Konkel when asked about the first match. “Against an average team its a tough hill, against Central its almost impossible.”