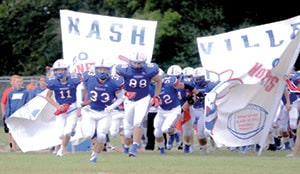 The Nashville Hornets football team used a balanced running game to come out on top against Clinton County foe Trenton-Wesclin Warriors on Friday night. Nashville got on the board early when they capitalized on a Wesclin fumble on the third play of the game. Senior Gable Evans recovered the fumble setting the Hornet offense up deep in Wesclin territory.

It would not take long for the Hornets to score as Kyle Schnitker took the ball in from 5 yards out just three plays later. Nashville could not convert the two-point conversion on the drive. The Warriors offense would settle down as on their next drive they used the running game led by Jacob Robinson to take the lead 7-6 on a 1 yard run by Robinson. The Wesclin touchdown marked the first time all season that Nashville had trailed in a game.

The Hornets would struggle the rest of the first quarter turning the ball over on their next drive. A big stop by the defense on 4th and 8 early in the second gave Nashville the chance to take the lead. Back to back 20 yard runs by Schnitker and Jaris Dalman set the Hornets up deep in Warrior territory. Schnitker would run the ball in for his second touchdown of the game taking the lead 12-7. The Hornets again failed to convert the two point conversion and went in at halftime up 12-7.

The Hornets got the ball first to begin the second half of play and did not take long to extend their lead. The Hornets used a big 40 yard run from senior Hunter Schultze to give them the ball at the 10 yard line. Two plays later Dalman got in on the scoring running it in from 4 yards out to give Nashville an 18-6 lead.

Wesclin came back late in the third with a touchdown of their own as Hayden Rapien found Blake Laird for a 14 yard touchdown to trim the lead to 18-13. They tried the extra point, but the Hornets got in there and blocked it, led by Schultze and Cameron Parker. The Hornets offense went to the bag of tricks when Schnitker took the ball to the outside. He would then throw the ball finding Schultze for a 56 yard touchdown pass to give the Hornets a 24-13 lead. That would end up the final as Nashville's defense held to move to 3-0 on the season.

Hunter Schultze led the Hornets on the ground taking the ball 12 times for 99 yards. He would also have two receptions for 66 yards, the big catch being the 56 yard touchdown. Kyle Schnitker was right behind him with 95 yards on 12 carries finding the endzone twice. He was also 1-1 through the air with a touchdown. Jaris Dalman added another 40 yards on the ground. Overall the Hornets ran the ball 40 times for 266 yards in the game. Talking about the attack Coach Kuhn said “ That's been kind of our m.o this year, not one person carrying the load, we've been able to distribute the ball.” On the defensive side Royce Newman and Gable Evans each had a fumble recovery, and Dalman and Chase Stanowski each had a sack for the Hornets.

The Hornets sent the fans home happy winning their first game at home after spending the first two weeks on the road. “It's always awesome playing here at home under the lights, the crowd was great, there' snothing like being at home,” said Kuhn after the game.

Nashville Hornets football players storm onto the field for the first home game of the season led by Jaris Dalman, Royce Newman, and Andrew Kash