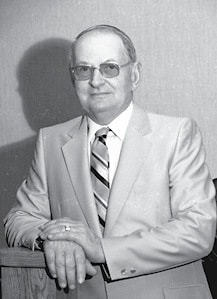 He was born on November 12, 1919 in Washington County at the home of his parents Raymond A. and Margaret M., (Zapp) Pitchford.

After graduating grade school from Whittenburg School, he took over responsibility of the family farm in rural Richview. He expanded the farm to include livestock and grain as well as maintaining orchards and marketing the fruit and strawberries to the local area. At one point in the 1960’s he had over 100 acres in strawberries as well as 100 acres of orchards. Annually, he would also purchase and transport pecans from the south to be sold at his market. As the farm operations expanded throughout the years he saw the need of grain storage and crop inputs be made available to the small farmers and began Pitchford Elevator in 1965.

Mr. Pitchford was involved in many business endeavors throughout the years but was especially interested in the banking industry as his grandfather, Alfred Pitchford was one of the founding directors of the Richview State Bank. Upon his grandfather’s death he was appointed to the board of directors and served in this capacity well over 60 years. In this role, he oversaw the bank grow from one location as Richview State Bank to three locations now known as Community Trust Bank with expansion into the Centralia and Nashville market. He placed great importance on the value of an independent family owned business as an integral part of a small community and was proud that six generations have been involved in the bank as well as the farm and elevator for which he ensured would continue well into the future. It was important to him to invest and reinvest in his surrounding community providing employment and economic development for the area he loved.

Preceding him in death are his parents, a brother Wesley Pitchford, sister Viola Reed, and son-in-law Curtis Grathwohl.