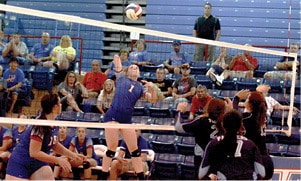 The Hornettes were back in action Tuesday September 22 as they traveled to take on Carterville in another Southern Illinois River to River conference matchup. The Hornettes came into the match 1-1 in conference and an overall record of 10-6.

The first game was closely fought between the two teams as the Hornettes squeezed out a 2 point victory 25-23 against the Lady Lions. The second game was also closely fought as Nashville looked to sweep the match. The Hornettes took the second game 25-20. In the match the Hornettes were led by Mackenzie McFeron with 11 kills, Alex Kubiak was second on the team with 2 kills in the match. Janie Holle added a block for Nashville. Kubiak led the team in service points with 9 followed closely by Paige Kasten with 8. Allyson Grabowski and Kasten each tied for the team lead with 6 assists in the matchup. Macie Kellerman led the team in digs with 6, while fellow senior Deidra Holzhauer was second with 4.

In the second match of the week, it took three games but the Hornettes pulled out a thrilling victory against conference rival Pinckneyville on Thursday September 24. Nashville got off to a slow start in the match they fell behind early. The Hornettes were able to tie the game early, but could not break through and take the lead throughout the matchup. The Hornettes got as close as two as the match wound down, but the Panthers took home the first match 25-21.

That set up the second game of the match. The match was even throughout with neither team taking control. Nashville led by as many as three in the early goings of the game but could not pull away. The game was tied at 18, when Pinckneyville went on a run stretching a lead to 5 points. The Hornettes used four service points from Macie Kellerman to pull back within one. With the Hornettes down 22-24, a kill by Janie Hollie allowed the Hornettes to take control. Allyson Grabowski put the game away behind four service points to give Nashville the 26-24 game 2 win to set up a deciding game three.

Game three featured another tight matchup between the two conference rivals. The Hornettes controlled the game throughout the first half, but the Panthers came back tieing the game at 17. The two team traded points back and forth as the game was tied at 18, 19, 20, 21, and 22 before the Hornettes gave themselves breathing room taking a lead of 24-22. The Hornettes would go onto to finish the matchup taking the final game by a score of 25-23.

“Crazy and exciting, the girls left a lot out on the floor from both sides, both teams. It was a lot of fun to watch,” said Coach Konkel after the match.

When asked about being down in the second game, Coach Konkel quoted Yogi Berra, “It ain’t over, til it’s over.” He talked about how the team continued to play to the whistle and didn’t give up on each other allowing them to push the match to three games.

The Hornettes used a balanced attack in the matchup, getting at least five kills from Mackenzie McFeron, with 9, Paige Kasten, with 6, Abby Kempfer, with 6, Alex Kubiak, with 6, Mariell Elliot, with 5, Janie Holle with 5.

The match pushed the Hornettes record to 11-6 on the season and 3-1 in conference. They will continue the conference slate next week as they travel to DuQuoin on Tuesday September 29 ahead of a rematch at Anna-Jonesboro on Thursday October 1.