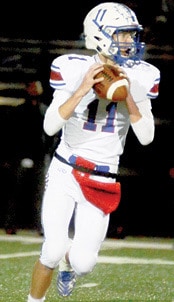 The Hornets dropped their first game of the season as they traveled to take on Carterville Friday October 2. The Lions came into the game with a record of 2-3. The Hornets were 5-0 going into the matchup.

Each team traded punts on their first series, but the Hornets got on the board using a big third down play in which Andrew Kash found Royce Newman on a pass to give them the ball at the one yard line. Kash ran the ball in from there on fourth down to give the Hornets a 6-0 lead. Jaris Dalman added the extra point to extend the lead to 7-0 in the first quarter.

The Lions then used a balanced offensive attack to drive back down the field scoring on a 9 yard run. The Lions could not convert the two point conversion, as they tried a fake field goal attempt. The fake was easily stopped allowing Nashville to keep the lead 7-6.

After a bad punt set up the Lions up deep in Nashville territory, they scored 5 plays later on a two yard touchdown run giving them a 12-7 lead, but again Carterville could not convert the two point conversion. On their next drive the Hornets used a balanced attack to drive down the field. The Hornets got a big reception by Newman on third down that set the Hornets up in Carterville terriotry. The Hornets would get another big third down conversion on the drive, when the Lions lined up offsides. Four plays later Dalman would get into the endzone from 15 yards out. Dalman missed the extra point, but Nashville held a 13-12 lead going into halftime.

Coming out of halftime, Carterville used a long run by quarterback Blake Hicks to give them first and goal on the five yard line. Three plays later Hicks ran the ball in to give Carterville an 18-13 lead. This time, the two point conversion was successful as Hicks got the ball across the goal line to extend the lead to 20-13 for the Lions.

The Hornets next drive was short as Kash's pass was picked off by Carterville, but Carterville's offense could not get any momentum as Newman sacked the quarterback on first down. Carterville would attempt a fake punt three plays later but lost yardage on the attempt.

The Hornets would get one more attempt to tie the game. Late in the fourth quarter, Nashville stopped the Lions on fourth down deep in Hornets territory. The Hornets took over on their own 8 yard line. Kash led the Hornets down the field using passes of 17 yards and 24 yards before breaking off a 31 yard run to give the Hornets the ball on the Carterville 10 yard line. The Hornets had one final attempt on fourth and goal from the 1, but the Hornets were stopped short.

The Hornets dropped the contest 13-20, their first loss of the season. Andrew Kash finished 15-22 with 162 yards passing and 54 yards rushing on 8 carries with a touchdown. Hunter Schultze finished with 52 yards on 13 carries, and 3 catches for 30 yards. Kyle Schnitker finished with 8 carries for 22 yards. Jaris Dalman had a touchdown on 5 carries for 22 yards. Ethan Reid finished 1-1 through the air for 26 yards to go along with 7 catches for 82 yards. Royce Newman finished with close to 100 yards receiving on 5 catches.

Defensively, the Hornets finished without a takeaway for the first time this season. The Hornets were able to pressure the quarterback as Newman finished with 4 sacks. Chase Stanowski had a sack for the defense. Nick Brown and Hunter Schultze each had .5 sacks in the game.

After the game, Coach Kuhn, talked of seizing the moment “we didn't take advantage of opportuniteis, we talked all week about how you seize the moment, and we didn't do a very good job of seizing moments where we could have swung the balance or brought the momentum back to our side.”

The Hornets now prepare for Homecoming as their next game is against Pinckneyville, who defeated Anna-Jonesboro last Friday to move to 4-2 on the season, at Hornet Field.