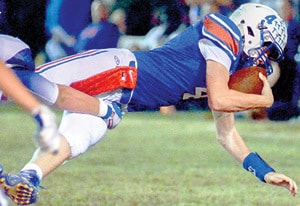 A close game in the first half turned into a blowout, as the Nashville Hornets took on the undefeated Columbia Eagles this past Friday night at Hornet Field. The game marked the last regular season game for the Hornets, who qualified for the playoffs, which begin next week. The football seniors, as well as the seniors for the cross country teams, and the cheerleaders were announced before the game began.

The Hornets were without starting quarterback Andrew Kash, who sat out the game due to a hamstring injury. The Hornets started sophomore quarterback Cameron Parker. The Hornets found themselves down early in the game, falling behind 0-7 after Columbia took the ball on the opening drive and drove down the field for a touchdown.

The Hornets got on the board on their second drive of the game after a long run by Hunter Schultze set up the offense inside the Columbia 10 yard line. Schultze would score 4 plays later on 4th and goal from the one. The Hornets were not able to convert the extra point and trailed in the game 6-7 late in the first quarter.

A big third down conversion after a Hornets penalty allowed Columbia to extend their lead on a long touchdown pass on their next drive. The extra point gave the Eagles a 6-14 lead early in the second quarter. The Hornets closed the gap just before halftime, as Schultze broke out 2 big runs on Nashville’s next drive. Parker was able to get his first touchdown of the season to get the Hornets within two points. The Hornets missed the two point conversion and trailed 12-14 at halftime.

After the game Coach Kuhn praised the efforts of Cameron Parker. “ Cameron Parker was huge for us tonight, he’s a sophomore, this is his first full week of getting all the reps and I think you saw a kid that really responded when he was called upon.”

After the Hornets were shut out in the second half for the fourth consecutive game, Coach Kuhn said “ I think it has a lot to do with some guys don’t have that Friday night light experience, so we’ve got to find a way to make practives as real as possible and get them prepared because playoff time it’s win or go home.” Coach Kuhn also emphasized how its been a while since the team put together a four-quarter game.

The Hornets first playoff game will be on the road as Nashville will travel to New Berlin to take on the Pretzels. The Pretzels are 7-2 on the season. The two losses for the Pretzels were against Virden (North Mac) in their first game of the season, and to Auburn. The Pretzels average 33.8 ppg on offense and play in the Sangamo Conference. The game will take place Saturday at 2 p.m.