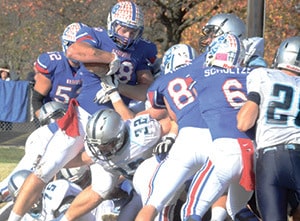 Senior Royce Newman tries to push his way into the end zone during the Hornets second round playoff matchup against the Niantic-Sangamon Valley Storm.

The Hornets started quick in their second round playoff game against the Niantic-Sangamon Valley Storm, and never looked back cruising to a 45-18 victory on Saturday. The Hornets came out of the gates quick scoring taking a 20-0 lead after the first quarter in what Coach Tim Kuhn called “ the best first quarter we've had on both sides of the ball.”

The Hornets got the ball first in the game and used their running game to drive down the field. Royce Newman capped off the drive with his first rushing touchdown of the seaosn. Jaris Dalman added the extra point to give Nashville and early 7-0 lead. The Hornets defense got the ball right back as Nick Brown intercepted a pass from Niantic-Sangamon Valley quarterback Miles Hutchins his first pass attempt. That set the Hornets offense up deep in Storm territory for their second drive of the game. Four plays later, Hunter Schultze ran the ball into the endzone from six yards out. An extra point by Jaris Dalman extended the Hornets lead to 14-0.

The defense stepped up again on the next drive by the Storm as Bryce Paszkiewicz picked off Miles Hutchins second pass of the game, giving the Hornets the ball at the Storm 33 yard line. Nashville didn't wait long to score as Andrew Kash found Newman for a 33 yard touchdown on the first play of the drive. The extra point was missed for the Hornets, but the lead was extended to 20-0 after the first quarter of play.

A punt by Niantic-Sangamon Valley set up the Hornets offense again. Facing their first long field of the day, the Hornets turned to Hunter Schultze, who accounted for almost 80 yards of offense on the drive. After having a run to set up the Hornets on the one yard line, Schultze found the endzone again to give the Hornets a 26-0 lead. The defense of the Hornets swarmed the Storm throughout the first half. On the Storm's next drive, junior Wyatt Royce fumbled the ball allowing Newman to recover and hand the ball over to the Nashville offense. Again Kash found Newman on the first play of the drive, this time for a 30 yard touchdown. The Hornets could not convert the two point conversion, but still held a commanding 32-0 lead with over half of the second quarter left to play.

The Storm got on the board in the second, taking advantage of a Nashville turnover, deep in their own territory. Niantic-Sangamon Valley would then start a six play drive which saw senior Zack Tate score on an eight yard run, the Storm would miss the extra point, and trailed 32-6 going into halftime.

With the momentum on the other side, the Hornets took the ball for their first drive of the second half and crushed any idea of a comeback, needing just three plays to drive down the field. Grant Reed took the ball for a 28 yard rush, followed by Schultze with a 31 yard rush, before Dalman ran the ball in from 8 yards out to take a 38-18 lead. The Storm got the ball back on their next drive near midfield, and used big third down conversions from Mason Hutchins to get deep in Hornets territory. Facing a fourth down on the Hornets 9 yard line, Miles Hutchins was sacked by Chase Stanowski, ending the drive and giving the Hornets offense the ball back.

The Hornets continued to run the ball successfully against the Storm's defense, and found the endzone again as Schultze scored for the third time in the game. Dalman's extra point made it 45-18.

The Hornets rushed the ball 48 times for 313 yards in the contest. They were led by Hunter Schultze, who finished with 111 yards and three touchdowns. Grant Reed ran the ball 10 times for 77 yards. Kyle Schnitker added 59 yards on 9 carries, and Jaris Dalman added 41 yards and a touchdown on 6 carries in the game. Through the air, Andrew Kash finished 6-10 with 113 yards and two touchdowns. Kash did not attempt a pass in the second half. Both touchdown passes went to Royce Newman who finished with 2 catches for 62 yards to go along with his first rushing touchdown of the season. Schultze caught two passes for 33 yards. Ethan Reid caught just one pass for six yards in the game.

Defensively, both Nick Brown and Bryce Paszkiewicz each had an interception in the game. Newman, finished with a fumble recovery, while Chase Stanowski finished with a sack. Both Erik Harkness and Dylan Kwiatkowski each had half a sack.