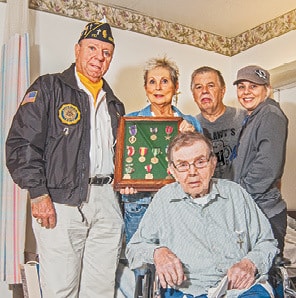 Harry Malawy, 91, (he will turn 92 on November 22) is a United States Army Veteran of World War II, and a former Prisoner of War. Harry was born in Posen and went to war in 1942. Harry now lives in Friendship Manor nursing home in Nashville and took some time to tell his his son and daughter-in-law, Butch and Judy Malawy, his granddaughter Crystal Malawy–Hasheider, Nashville American Legion Chaplain Bob Meier and The Nashville News about his experience.

After being sent to Italy, Malawy was captured and was a POW for about a year in 1943. He stated that he was liberated from captivity by the Russians.

“I’ve already forgot a lot of things,” Malawy said of his experience as a POW, “I’m glad it’s over.”

Malawy served through early 1946, when he returned home. He married Rose Smugala, who died in June of this year, and together, they had five boys: Dennis, Butch, Ron, Don and Glenn. Harry was a farmer during his working years.

On the wall of Harry’s room is a case adorned with a POW/MIA flag and holding his medals from the war, including, , a Purple Heart and a Bronze Star.

When asked if he had a message for readers of The Nashville News, Malawy said with a grin, “just stay out of trouble.”

“We’re proud to have Harry hear as one of our Veterans,” said Meier. “We’re proud of his service so that we can have the freedom we have here today.”

Turning to Malawy, Meier continued, “Harry, we thank you for your service, it’s a great honor to be here today.”

While Malawy might have underwent unimaginable difficulties as a POW, he was lucky in one regard – when it was over, he got to come home. There are still many that haven’t made it, Meier said, including many from WWII.

Among the different area observances from Veterans Day will be a free Veterans’ Lunch at Meier’s Chevrolet from 11 a.m. to 2 p.m. At this event, Meier stated that he will have a POW/MIA table set up and will talk to any wh are interested about what the different items mean, and will also let visitors know about the continuing plight of those who have not yet made it home and their families.