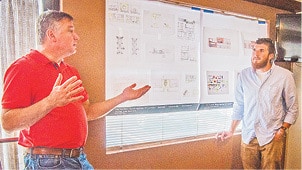 A Southern Illinois University – Carbondale Architecture class called Urban Design Studio has been visiting Nashville, Pinckneyville and Murphysboro, “The 127 Corridor” as they’ve nicknamed it and have been coming up with ideas to highlight the downtown areas of the three towns. At the Wednesday, November 11 meeting of the Nashville Chamber of Commerce at Little Nashville, a handful of the students and their teacher, Steven Turnipseed, presented some of the ideas they have had so far.

“We see this corridor as something that’s pretty vibrant and has a lot of potential,” said Turnipseed.

Some of the ideas the student proposed would be hard to do, if not impossible, and most would be drastic changes. The point though, was to sow ideas, and perhaps to get the residents of these three towns thinking about some of the points they make.

Nicholas Mick, a student from Vincennes, Ind., suggested a roundabout at the intersection of State Routes 127 and 15 and mentioned dividing Route 15 with a median with added greenspace in it.

Josh Curvey, a student hailing from Alton discussed parking spot changes (a recurring theme) and spoke about a gradation of green areas from the very green residential areas to the south into the more sparse downtown.

Curvey also suggested the addition of protected bike and pedestrian traffic zones, as well as a clocktower or some other type of “really nice gateway” into Nashville’s downtown – at the current location of Rollin’ Up (again, these are ideas, not plans).

Reno Mason from Pekin suggested the idea of increasing the amounts of residential units atop businesses and also spoke about adding greenspace and reorganizing parking.

Following the presentation, Chamber members conversed with the students and took a look at the drawings and plans that they had displayed in the meeting room.