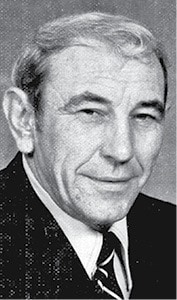 Mr. Charles S. Kemnetz of Nashville, departed this life at Friendship Manor Health Care Center in Nashville, on Tuesday, November 10, 2015 at 3:50 A.M. He had attained the age of 83 years, 6 months and 29 days.

Mr. Kemnetz was born on April 11, 1932 In Bolo Township Washington County, the son of Leo and Lillie (Glazik) Kemnetz. He was united in marriage to Esther Roethemeyer on October 3, 1953 at Trinity Lutheran Church in Nashville, and she survives his passing.

Charles was a member of the United States Air Force from 1951 to 1955. He worked many years at Nashville Milk Company “Top Star” and also at General Radiator in Mt. Vernon. Charles later worked for 20 years and retired from Washington County Workshop in Nashville. He was a 64 year member of the American Legion, serving as commander in 1960 and he was also involved with the Honor Guard for military funerals. Charles enjoyed bowling.

He was preceded in death by his parents, two brothers, Edward and Joseph Kemnetz and a brother-in-law, Ralph Roethemeyer.

Funeral services were held at Trinity Lutheran Church in Nashville, on Saturday, November 14, 2015 with Pastor Aaron Kotila officiating. Interment will follow in the church cemetery.

Military graveside rites were accorded by the American Legion Post 110.

In lieu of flowers, memorials may be made to the Trinity-St. John Lutheran School or the American Legion Post 110 and will be accepted by Campagna Funeral Home, whom is assisting the family with arrangements.