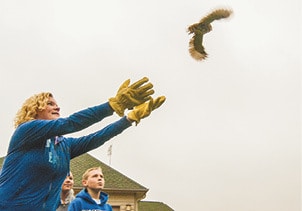 ABOVE, Amber Lehde releases one of the owls back into the wild. RIGHT, one of the newly freed owls takes up a spot in a tree just yards away from where they were found back in June. 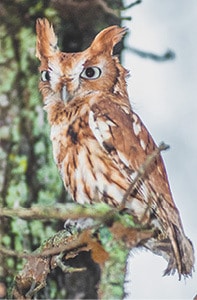 Wings were flapping outside the residence of Sara and Randy Habbe this Sunday when a triplet of screech owls, found there early in June (and featured on the front page of the June 24 edition of The Nashville News) were released after having been rehabilitated.

Amber Lehde, of Lehde Tree Service, discovered the owls along with Doug Matlock on June 8 at the Habbe property when they were sectioning a tree they had felled.

After finding the birds, Lehde got in touch with the Washington County State Conservation Are, who then got her in touch with The Treehouse out of Dow, who in turn helped her to contact Maggie Hughes, who rehabilitated the birds.

Four birds were released by Lehde on Sunday, who was there with the Habbes and members of her own family. Three of the birds were originally found there; the fourth was from another rescue. Lehde removed the owls, now covered in bright red-brown spotted plumage (before they had been covered in downy fluff), and one-by-one tossed them into the air and let them fly away.

After the release, one of the birds had perched on a tree just to the east of the Habbe’s home, not far from where they were first found. It was home.