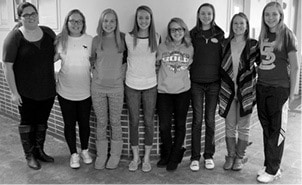 The Nashville Hornettes golf team hosted their end of the year banquet, where they would cap off a terriffic season. The Hornettes golf team advanced out of regionals, but fell just short of a trip back up to the state tournament. Although the team did not make it, sophomore Hope Rueter advanced as an individual.

At the banquet, members of the Hornettes golf team were given awards for their performance throughout the season. Hope Rueter, Jill Guetersloh, Sara Guetersloh, Taylor Prange, Dailey Szopinski, Rachael Kell, Jordan Stiegman, and Brook Bartling all were awarded a varsity letter at the banquet. 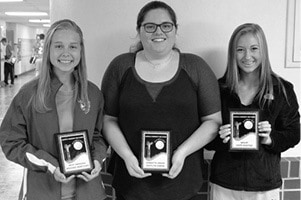 Three members of the Hornettes golf team hold the awards given to them at the end of the year banquet that was held on Monday, November 16. Sophomore Brooke Bartling won the most improved award. Sophomore Kaitlyn Simons won the Hornette Award, and sophomore Hope Rueter won the team MVP award at the banquet.

as the most improved player on the team. Kaitlyn Simons took home the Hornette Award at the banquet.

The Hornettes golf team had a great season, advancing out of regionals, and missed advancing to the state tournament as a team by just 13 strokes finishing 4th in the sectional behind Massac County, Belleville (Althoff), and Mt. Carmel.