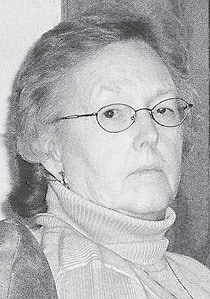 Mrs. Wilma Stewart of Venedy departed this life at Washington County Hospital Extended Care in Nashville on Friday, November 27, 2015 at 10:40 AM. She had attained the age of 74 years, six months and 20 days.

Mrs. Stewart was born on May 7, 1941 in Norris City, the daughter of Theron and Berenice (Aud) Spence. She was united in marriage to Glen Stewart on November 22, 1969 in Carbondale, and he survives her passing.

Wilma was a homemaker and a member of the Easter Star. She liked to travel and enjoyed crocheting.

Left to mourn her passing is her husband Glen Stewart of Venedy; two sons, Mathew Stewart and wife Khristine of Oakdale, Conn., and Daniel Stewart of Beckley, W.V.; five grandchildren, Carly and Joshua Stewart and Jordyn, Damon and Jeremy Stewart; a sister, Lena Hake and husband Orville of Carbondale; and other relatives and friends.

Per the wishes of Wilma and her family, cremation was performed and cemetery services will be held at Jefferson Barracks National Cemetery in St. Louis at a later date.

Should friends desire, memorials may be made to the American Cancer Society and will be accepted by the Campagna Funeral Home, who is assisting the family with arrangements.