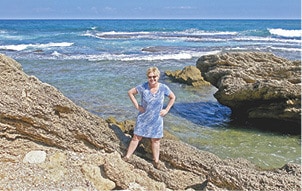 ABOVE, Jodi Harre of Nashville on the coast of the Mediterranean at Caesaria. BELOW LEFT, Jewish worshipers at the Wailing Wall in Jerusalem. BOTTOM, The cityscape of Jerusalem with the Dome of The Rock near the center. 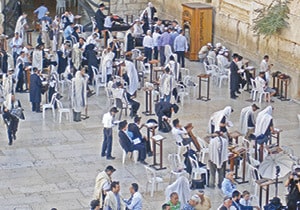 In the last two weeks of June, 2014, Jodi Harre took the trip of a lifetime, visiting and touring Israel. On Tuesday, January 19, she will be giving a presentation called “Israel: Journey To The Land Of The Bible,” where she talks about her trip. The presentation is open to the public and will be at the Nashville Public Library at 6:30 p.m.

“I flew into Tel Aviv, went as far south as Beersheba, where Abraham, Isaac and Joseph would have lived,” said Harre. “We ended our trip, the highlight maybe, was in Jerusalem.”

Harre said that she traveled with a Hebrew guide, who was a believer, as well as an American guide, a college professor.

Harre teaches at and trains leadership for the Bible Study Fellowship, which she describes as a “interdenominational, in-depth bible study.” It has about 1,000 classes worldwide, include about 400 women meeting in O’Fallon at First Baptist Church.

Going into the trip, “my main desire was to be able to teach about the day-to-day life of Israel,” Harre said.

The presentation she is giving at the library will cover a range of topics.

“I am going to talk about the past, going back as far as the time of Abraham,” said Harre, “but we are going to take a look at the life of the Jews in Israel today.”

Harre is a believer, and said, “I will make some spiritual applications, not just present history.”

“Those who are involved and active with their church will get a lot out of this,” she stated, “but so will those who are interested in history.”

Harre is a member of Trinity Lutheran Church in Nashville and over a three week period, she said, “I gave this presentation and what people said is that through the story and pictures, the Bible came to life.”