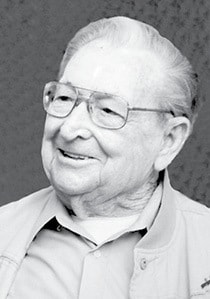 Kenneth was a laborer for 42 years at the IC Railroad. He served in the United States Army from September of 1943 to April of 1946 during W.W. II.

He was member of the St. Charles Catholic Church in Du Bois.

Mass of Christian Burial was held on Tuesday, January 19, at the St. Charles Catholic Church in Du Bois with Msgr. Dan Jurek officiating. Burial will be at the St. Charles Cemetery in Du Bois, IL. Military graveside rites will be conducted by the Du Quoin VFW, American Legion and the Army National Guard.

Friends may make memorials to St. Charles Cemetery, St. Annís School, or Masses and will be accepted at the funeral home.

Searby Funeral Home in Tamaroa is in charge of arrangements. For additional information or to sign the memorial guest register, please visit www.searbyfuneralhomes.com.