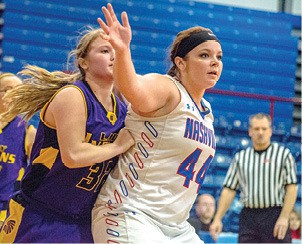 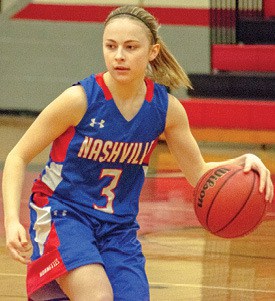 Karly Stanowski calls for the ball during the second half of the Hornettes win over the Carlyle Indians on January 14.

The Hornettes split two games this past week, as they defeated the Carlyle Indians, and lost to the Hillsboro Hilltoppers in the first round of the 30th Annual Scott Credit Union Highland Girls Basketball Tournament.

In the Hornettes first game of the week, they defeated the Carlyle Indians 50-30. The Hornettes didn't trail in the game, as they took the lead on a three pointer by Paige Kasten and never gave it up. The Hornettes stretched out their lead to six points at the end of the first, as they led 14-8. The Hornettes took control of the game in the second quarter, outscoring Carlyle 15-6 to take a 29-14 lead into the halftime break.

In the second half, Nashville was able to extend their lead in the third quarter, taking a 39-23 lead into the final quarter of play. The Hornettes were able to cruise to a twenty point victory.

After the game, Coach Doug Althoff talked about his team's performance, “ I was pretty pleased with the wy we came out, to me it looked like we were ready to play and we just continued playing well and hit some shots when we needed to, and I though we played some pretty good defense too.

The Hornettes finsihed the game with three players in double figures, led by Kasten with 14 points. Mackenzie McFeron added 13 points, while Karly Stanowski scored 11 points in the win. Janie Holle chipped in eight points, followed by Libby Ahlers and Sophie Heck with two points apiece in the win.

The Hornettes then began play in the Highland Girls Basketball Tournament, as they met up in the first round against the Hillsboro Hilltoppers. A close game throughout, the Hilltoppers were able to use a late 21-0 run to put away Nashville, by a score of 41-28.

The Hornettes started off slow, as Hillsboro jumped out to an 8-0 lead in the opening minutes of the game. Nashville battled back, with a a 7-3 run of their own. The Hornettes were able to tie the game, is the closing seconds of the quarter, as Hillsboro turned the ball over and Holle made a basket right before the buzzer sounded.

Although, the Hornettes tied the game, they were not able to take the lead, as Hillsboro took a four point lead to begin the second quarter. Nashville again battled back, as Stanowski made key free throws, to again tie the game going into the halftime break.

Early in the third quarter, the Hornettes were finally able to take the lead, as Holle converted on two free throws, to give the Hornettes a 21-20 lead. The Hornettes would extend the lead to 24-20 after Stanowski coverted a three point play. Trailing 24-20, Hillsboro increased the defensive pressure, holding the Hornettes scoreless, until Ahlers scored with 24 seconds left in the game.

The Hilltoppers outscored the Hornettes 21-0 through the third and fourth quarters, to take a commanding 41-24 lead. After the game, Coach Althoff talked about the run, “I think we hung with them, we actually got the lead, but I think we just ran out of gas. You've gotta give credit to them, I mean they turned the heat up, and they're not the number two team in the state for no reason, they are a very good team, I told the girls sometimes you just have to tip your hat to them.”

Coach Althoff praised the effort of the Hornettes throughout, “ I have no complaints about their effort, they played as hard as they could, as long as they could, and sometimes you just go against really good teams like that.”

Stanowski led the Hornettes with 10 points and 12 rebounds in the game, followed by McFeron with seven points. Ahlers and Holle scored four points apiece, while Kasten scored three points to round out the scoring in the game for Nashville.

Paige Kasten dribbles down court during the Hornettes loss in the opening round of the HIghland Tournament to Hllsboro.