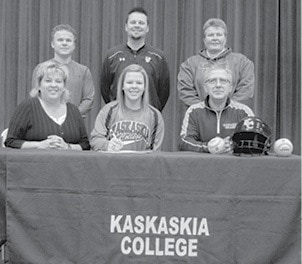 Deidra Holzhauer, a two-sport athlete, and a member of the 2015 Hornettes Class 2A Softball State Championship team, has signed her letter of intent to play softball next season at Kaskaskia College. Holzhauer will join fellow Nashville High School alumni Daley Buchanon and Hanna Yung as members of the Kaskaskia College softball team.

Former Nashville softball coach Dempsey Witte talked about what Deidra has brought to the program, “she's done quite a few things for us, and has been a big part of our success over the past couple of years. In the past four years, Holzhauer has been a part of, not only last year's state championship team, but the Hornettes 2013. Witte went on to say he expects Holzhauer, to blend right in at KC, “her work ethic is second to none, so I think she's gonna fit in well at Kaskaskia College and I think she'll be a great leader for the varsity program this season, being the only senior returning.”

Kaskaskia College's coach Torey Crowell, touted the versatility of Holzhauer, saying “she's got the ability to go to another position when she's not pitching and use her bat.” Crowell, said as of right now, she expects Holzhauer to play first base when she's not pitching, but notes that anything can happen between now and next season. Crowll also touted the softball program at Nashville High School saying, “this program really enstills in them what we need, and you don't have to work with them much.”

As for Holzhauer, she says the biggest adjustment will be “learning how to play with different players from other schools and not just our school. Holzhauer says she chose Kaskaskia College, because “I really liked the facilities and they've been interested in me for a while.” While at Kaskaskia College, Holzhauer is going to study athletic training with hopes of working with athletes further down the line. As for her time at NCHS, Holzhauer says “last year was definitely the highlight of my career, but I’m definitely looking forward to pitching more this year.