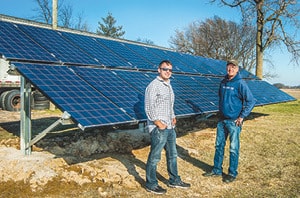 David Ronen and Bob Konkel stand by Konkel’s new 6 kW solar power array, located along US Highway 51 at the intersection of the DuBois Blacktop. Ronen and Konkel spoke about an energy credit from the State of Illinois that could make panels like these pay for themselves within five years.

On U.S. 51, at the intersection of the DuBois Blacktop, there’s a new sight at the south side of Power Trans Plus (PTP). Bob Konkel, the owner of PTP, has installed a series of solar panels, and while he is reaping the benefits of the power they produce, he says one of the real payoffs could be from the SRECs, or Solar Renewable Energy Credit, which are shares of money allocated by the state for generation which pay dividends to those who install the panels.

Konkel is a dealer-affiliate for IL–Solar, a company owned by David Ronen of Litchfield, who says that he has been installing the panels all over the state, and bidding on SRECs to help make the payback on the panels much quicker than it once was.

“We bid on these credits,” said Ronen, “and for every meg (megawatt) that is generated, you get an SREC.”

“The government has said, ‘you will take this fossil fuel and get over here to where it is clean.’ That is mandated,” said Konkel, and SRECs are an economic incentive to get people to do so.

There are two types of systems, a grid-tied and an off-grid. “You have to grid-tie the system,” Ronen said, in order to get the SRECs. An off-grid system would not only not pay a user for the SRECs, but off-grid systems would also cost far more to install in the first place, owing to the costly, and heavy mountain of batteries needed to store the collected power on site.

“Grid-tied feeds back into the transmission lines,” Ronen said. “To get all of your incentives, your solar-renewable energy credit, your federal tax credit, all of those, you have to be a grid-tied system.”

“Out of staters can come get those just as well as in-staters,” said Konkel, but the level of money paid to solar users per SREC depends on the company that bid on the credits. “You have to bid to the state, then the state pays you, and you pay the supplier (customer with solar panels).” Konkel said that he had seen competitors quoting SRECs at about $110 per megawatt, where IL-Solars were paying at $160 to $170 per megawatt.

“The thing that people don’t realize,” said Ronen is that in addition to any money they receive from the SRECs, “you get to keep all of the power that you make.”

“The guy who thinks he is going to get a $0 bill is wrong,” said Konkel.

“You’re still going to have a customer charge and a meter charge,” Ronen continued, “all of your other charges and fees though, as your meter goes down, so will everything else.”

“Two years ago, I wasn’t selling much solar, but now, with these SRECs, that’s when I brought it to Bob,” Ronen said. He stated that the systems are getting to the point where the credits and incentives make it so that they can pay for themselves on a three-to-five year timespan.

“The paybacks on this are twice as fast as geothermal and the warranties are three times what those are,” said Konkel – the panels carry a 25 year warranty, while the inverters, necessary to convert the power to alternating current have ten year warranties.

Konkel stated that the system at PTP cost him “right at $15,000.” So far it’s peak generation has been 5,050 watts and their most productive day (at the time of the interview) was January 12 when they produced 33.9 kilowatts. He installed the system right at the start of the year.

Their several options to mount the panels. Steel roofs are the cheapest, said Ronen, but they can put them on other types of roofs, or even build a carport out of solar panels. They do warn that ground mountings and extended distances from the power box can add expense to an installation.

Another advantage to solar panels is their resilience. They are very low maintenance, especially compared to wind power with its turbines and moving parts, and the panels are rated to survive debris strikes and very high winds.

Konkel and Ronen warn that the SRECs from Illinois that make this so attractive are a limited proposition, at least at the current time. “When they’re gone, they’re gone,” Konkel said.