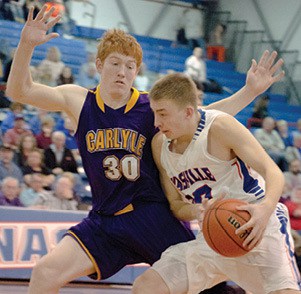 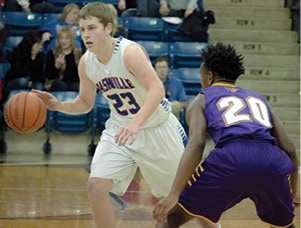 Junior Ryan Brink draws contact against Carlyle’s Dru Johnson as he drives towards the hoop during the Hornets victory over the Indians.

The Nashville Hornets bounced back from back to back losses to Central and Mater Dei in the Nashville Invitational Tournament, to defeat Anna-Jonesboro and Carlyle on back to back nights. The Hornets stayed perfect in conference play, moving their conference record to 6-0, with just four conference games left to play, with their win over Anna-Jonesboro. The Hornets next game will be Friday, February 5 as they take on the Sparta Bulldogs at Assembly Hall.

The Hornets used a balanced scoring effort, and a dominant second quarter to put away the Anna-Jonesboro Wildcats 45-21, in their last regular season matchup of the season. The Hornets got off to a quick start in the first quarter taking a five point lead after the first quarter. With the Hornets up 14-9, the Hornets would outscore Anna-Jonesboro 18-0 in the second quarter to take control of the game. The second quarter was a team effort for Nashville, with Brady Bultman, Ryan Brink, Jake Haley, Royce Newman, and Brogan Kemp all scoring in the frame. The dominant quarter, allowed for the Hornets to go into halftime with a 32-9 lead. The Hornets would extend their lead in the third quarter, and would go into the fourth with a commanding 27 point lead over the Wildcats. In the final quarter, the Hornets were able to cruise to a 45-21 victory.

The Hornets were led in the matchup by Brink with 11 points, eight of which were scored in the first quarter. Newman added nine points, followed by Kemp with eight points. Hayden Heggemeier and Bultman each added six points in the win. Haley scored five points to round out the scoring for the Hornets.

The Hornets were back in action the next night as they took on the Carlyle Indians. The Hornets again used a big second quarter to take control of the game on their way to a 59-41 victory. The game was even through the first quarter, as both teams were tied at 11 going into the second quarter. In the second, the Hornets took control with an 11-0 run to end the quarter, highlighted by four points apiece from Bultman and Newman. The Hornets went into halftime with a 26-12 lead. Coming out of halftime, the Hornets extended their lead, outscoring Carlyle 19-10 in the third quarter. Going into the fourth, the Hornets held a 45-22 lead over the Indians. In the fourth, the Hornets were able to cruise to a 59-41 victory.

The Hornets finished with three players in double figures in the win. The Hornets were led by Newman with 18 points. Bultman added 15 points, followed by Brink with 12 points in the matchup. Heggemeier scored six points, while Riley Edwards scored four points. Haley and Kemp added two points apiece in the win for Nashville.

After the game Coach Brad Weathers talked about the games. “It's a very good weekend, a good conference win, and Carlyle is obviously a sub-sectional team, a team that's in our sub-sectional, and a team thats been playing very well as of late.”