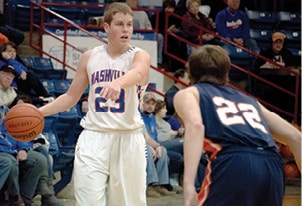 After scoring a season high 80 points against Carterville on Friday night, the Hornets dropped their first conference game of the season against Pinckneyville on Saturday. The win moved Pinckneyville into a first place tie in the Southern Illinois River to River Conference: Mississippi Division with Nashville. The Hornets and Panthers have matching 8-1 records in conference play with each team having one game to play. The Hornets host DuQuoin on Friday February 19. Pinckneyville travels to Carterville for their final game of the season.

The Hornets began the weekend against Carterville on February 12. The Hornets used a dominant first quarter, and withstood a second half run by the Lions, to win 80-66. The Hornets started the game off quick, as Brady Bultman started the game by converting a four-point play to give Nashville an early lead. The Hornets would go on to dominate the first quarter, outscoring Carterville 24-8 in the frame. The Hornets had a balanced attack in the first, as three players had at least five points. In the second quarter the Hornets continued the onslaught, led by Ryan Brink who hit two big three pointers in the second quarter. By the end of the second quarter, Nashville’s lead had ballooned to 22 points. Coming out of halftime, Carterville got hot from the field. In the third quarter, the Lions outscored Nashville 25-12 to cut the Hornets lead to just nine points going into the final quarter. In the fourth, the Hornets would be able to gain breathing room down the stretch, sinking their free throws. The Hornets outscored Carterville 27-22 in the final quarter to win 80-66.

The win marked the most points that the Hornets have scored all season, with their previous high being 65 points against Carlyle and Anna-Jonesboro earlier in the season. After the game, Coach Weathers talked about the first half,
“Most people are gonna key in on Royce in there a little bit and try to help off, and we really lit it up on the perimeter and opened things up for us.” Weathers went on to talk about the second half run for Carterville in the third quarter, “they were putting some heat on us, and we finally got down and scored some easy buckets against their pressure, and we were trading baskets for a while because they were trying to press and bring everybody up. We also threw it away in that stretch, but we had a good little run there in the last four minutes of the ballgame that got us some separation again.”

Bultman led Nashville in the game with 19 points. Royce Newman added 16 points in the game, 13 of which came in the second half. Brink hit scored 12 points in the first half, and finished with 15 points. Hayden Heggemeier also scored in double figures with 14 points. Jaris Dalman, and Brogan Kemp finished with six points apeice, followed by Riley Edwards with two points in the win.

The Hornets were back in action Saturday night, as they traveled to take on Pinckneyville. A close game throughout the first half, Pinckneyville pulled away after halftime to give the Hornets their first conference loss of the season. The Panthers dominated the second half, on their way to a 74-49 victory.

Tied at 15 after the end of the first quarter, the Hornets trailed by just two points with less than a minute to go in the second quarter. But as time ran down, Pinckneyville’s Grant Jausel was fouled on a three point basket, and converted the four-point play. A quick miss by Nashville, allowed the Panthers to storm down the court to extend their lead to eight points right at the buzzer. In the third quarter, Pinckneyville pulled futher away, as they outscored the Hornets 21-11 in the frame. The Hornets could not come back, as Pinckneyville cruised in the fourth quarter to a 74-49 victory.

Newman led Nashville with 20 points in the loss for the Hornets. Heggemeier joined Newman in double figures with 12 points, followed by Brink with seven points. Kemp added five points, and Bultman scored four points. Langdon Briles scored one point to round out the scoring.

The Hornets have a break before they finish up the season, Friday night as they take on the DuQuoin Indians. Friday night’s game will be Senior Night, and is the last home game this season. The game begins at 7:45 p.m. 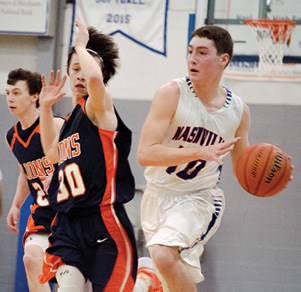 Brady Bultman runs the offense in the first half of the Hornets conference win over the Carterville Lions on February 12.

Hayden Heggemeier runs the ball down the court, late in the Hornets 80-66 win over the Carterville Lions.