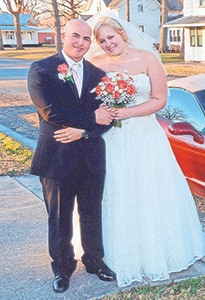 Melanie Elizabeth Restoff and Nicolas Alexander Otero were married at Zion United Church of Christ, Addieville, Illinois at 3:00 pm on Saturday, December 19, 2015. The wedding was officiated by Pastor Carol Shanks and Followed by a reception at Gateway Classic Cars in O’Fallon.

The bride is the daughter or Gerard and Kim Restoff of Hoyleton, Illinois and the groom is the son of Alberto and Kathy Otero of Radom, Illinois.

Given in marriage by her father, Melanie was attended by Brianna Nielson as maid of honor with Sydney Rather and Sara LaBusier as bridesmaids. Nicolas’ best man was John Ainscough with Brett Wiebler and Andrew Davis as groomsmen. The bride’s brothers, Dennis, Brandon and Ryan Restoff served as ushers. Meghan Orr was the organist.

The bride, 21, graduated from Illinois State University and holds a Bachelor’s degree in Agriculture Business. The groom, 22, went to Kaskaskia College for his Associates in Criminal Justice and Arts. He is currently in the United States Marine Corps stationed at Camp Pendleton on the southern coast of California.

Melanie and Nicolas settled in Fallbrook, California after spending the Christmas holiday with their families.