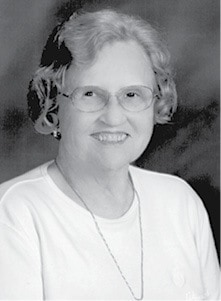 Elsie N. Pries 93 of Hoyleton, passed away at 9:12 p.m. on Friday, March 4, 2016 at Washington County Hospital in Nashville. She was born on July 4, 1922 in Washington County the oldest child of Henry and Amanda Westerfeld Niermann. She lived her entire life in Washington County. Elsie married Nelson C. Pries on August 3, 1940 and he passed away on January 25, 2008. Also preceding her in death were her parents, 2 brothers; LeRoy and Robert along with In laws; Arleen, Herbert and Leo Pries.

Elsie was Vice President of N.C. Pries Implement, Inc. of Hoyleton, the business she and her late husband purchased in 1955. She was a member of the Hoyleton American Legion Auxillary, Zion United Church of Christ in Hoyleton and the Hoyleton Community Club. Prior to losing her sight, she enjoyed reading, handwork, sewing and travel.

Funeral services will be held at 11:00 a.m. on Saturday, March 12, 2016 at the Zion United Church of Christ in Hoyleton with Rev. Howard Self officiating. Burial will follow in the church cemetery. Friends may call from 9:00 a.m. until service time at the church. In lieu of flowers, memorial contributions are suggested and may be made to Washington University Eye Research in St. Louis, Illinois Spina Bifida Association or the Irvington Food Pantry. Styninger Funeral and Cremation Chapel in Hoyleton is in charge of arrangements. Online expressions of sympathy may be made at www.styningerfuneralhomes.com.