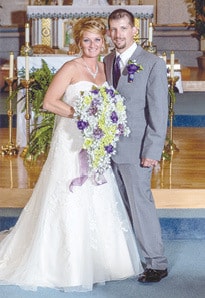 Tiffany Pauline Hoffman, daughter of Mr. and Mrs. Victor Hoffman of Du Bois, and Brendan Harold Eater, son of Mr. and Mrs. Richard Eater of DuBois were married on Saturday, September 19, 2015 at 1:00pm in the afternoon.