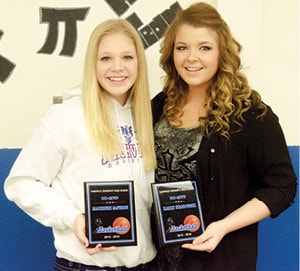 Sophomores Mackenzie McFeron and Karly Stanowski each earned Co-MVP Awards for the Hornettes basketball team. The Hornettes lost in the regional final against Mater Dei.

A young team for the Hornettes this season, five of the nine losses for Nashville came to 3A or 4A teams. In the Nashville Thanksgiving Invitational, the Hornettes lost to 3A Mascoutah, and 4A Collinsville. The Hornettes would go on to lose to O'Fallon in the Mascoutah Holiday Tournament, Carbondale in early January, and Taylorville in the Highland Tournament.

Karly Stanowski and Mackenzie McFeron brought home the honor of Co-MVP this season. Stanowski and McFeron had previously been named a part of the IBCA All-State Team Special Meniton. Janie Holle was honored with the free-throw award, as the best free-throw shooter on the team.

This season the Freshmen team finished with a 3-6 record, facing a very difficult schedule including some varsity teams. The JV team finished the year with an 8-8 record.