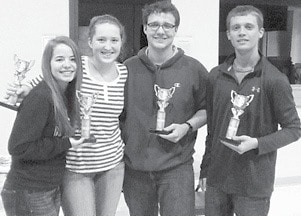 The Nashville High School Olympiad team is enjoying a successful season as both teams advanced out of the regionals, sectionals, and to the state finals. We sometimes take for granted that these students continually qualify without realizing what a huge accomplishment this is. We are competing in a one class system with some private and science/technical schools and public schools 3 or 4 times our size.

Olympiad is based on hands-on competitions in the areas of math, science, language (English and world languages), music, and engineering combined with creativity and art.

Qualifying for state with 1st place finishes at the regional and sectional levels was the team of: Alyssa Lohmann, Abigail Hall, John Schroeder, and Tyler Williamson.

Also qualifying for state with a 2nd place finish at the regional and 3rd place at sectionals was the team of Sarah Doerr, Brent Harris, Jamilyn Martin, and Ethan Small.

Both teams will compete at the state finals in late April. 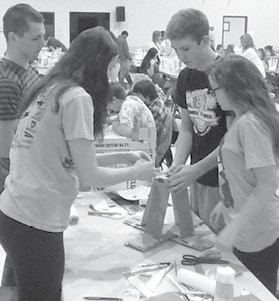 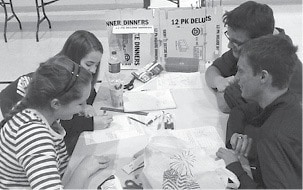 NCHS students Alyssa Lohmann, Abigail Hall, John Schroeder, and Tyler Williamson were a part of the first place team that will compete in the state finals in April. 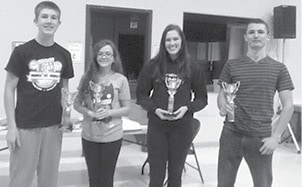 The team finishing in third place at the sectional, that will also compete at the state finals in April, were Sarah Doerr, Brent Harris, Jamilyn Martin, and Ethan Small.