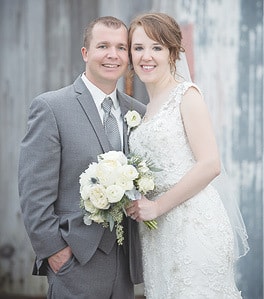 Hillary Nottmeyer and Drew Whalen were wed on December 12, 2015 at Trinity Lutheran Church in Hoffman.

The bride is the daughter of Dennis and Debra Nottmeyer of Hoffman. Her maid of honor was Hope Nottmeyer. Her bridesmaids included Janelle Mann, Haley Poldan, Kelsey McClay, Sara Kuper, Bridget Gilbreth and Alison Whalen. The flower girl was Grace Greten.

Whalen is a 2005 graduate of Waverly High School, a 2009 graduate of the University of Illinois, and a 2014 graduate of Indiana University and Purdue. He is a senior sales operations analyst at GSI in Assumption.

The couple resides in Decatur.