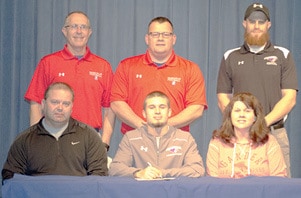 When asked why he chose McKendree Paszkiewicz said, “I chose McKendree because it had a a small town freel and I really liked the small class sizes, and coach Edwards was a big influence, very enthusiastic, and really had a passion for powerlifting. I really chose McKendree because of him, and just the whole student body made me feel at home. Looking back on his football career, Paszkiewicz said his favorite sports memory was, “beating New Berlin in our first playoff game in football this year, that was a nailbiter.”

McKendree Powerlifting coach Dave Edwards talked about what he expects to get from Paszkiewicz, “Bryce brings to the program a raw talent to lifting that has yet to be refined. He is a naturally strong kid already, and with his work ethic, and time focused solely on lifting has the ability to become a very formidable force for me on the platform.” Edwards went on to talk about his plan for Paszkiewicz moving forward, “the plan right now is to have him move up a weight class possibly. I would like to put 10 to 15lbs of muscle on his frame, which would allow his numbers to jump off. I think if we can get him into the next weight class he would be a national champion in the college realm.”

Edwards says the biggest transition for Paszkiewicz will be getting used to the training, but adds he shouldn't have a problem, “While he has competed in the Murphysboro meet for several years and lifts on his own. He is not use to the everyday grind of being a powerlifter yet. I think the transition will be quite smooth for him, and foresee no problems with it.”

Hornets football coach Time Kuhn raved about the kind of person Paszkiewicz is, “ Extremely excited for Bryce coming off of a huge injury that he had his junior year, he sat out his whole junior year, and put this in front of himself as a mission to get back and get back at a very high level, and he was able to do that, and now he's gonna be able to carry it on at a Division II school as a powerlifter. McKendree's coach Edwards agreed, “Bryce is a great, hardworking, and very academically gifted athlete that allows me some flexibility in the lighter classes that I have not had until now. I am extremely excited to watch him grow as a lifter, a person, and succeed for the next four years on the platform.”

Coach Kuhn also talked about the group of seniors from this year's team, “it's just a hardworking group and they're getting rewarded for the effort they put in.” Earlier in the year, both Hunter Schultze, and Royce Newman signed scholarships to play football.” Paszkiewicz said of his time in Nashville that he'll miss “the small town feel, and knowing everybody in the stands, and prolly jusst all my friends and stuff like that.” While at McKendree, Paszkiewicz plans to major in accounting or finance.