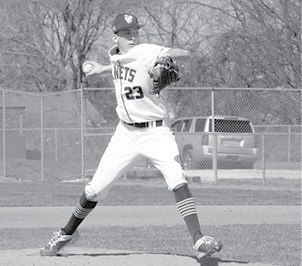 Hornets pitcher Ryan Brink delivers a pitch during the Hornets thrilling comeback win over the Herrin Tigers during the second game of the Hornets’ doubleheader.

After dropping their first two games of the season to Rockford Lutheran, the Nashville Hornets have been on a roll. The Hornets defeated Trico on March 21, before taking on Freeburg and Herrin in a doubleheader on Saturday, March 26.

The Hornets started off the day on Saturday with a thrilling 3-2 win over the Freeburg Midgets. Austin Anderson started the game for Nashville and went six strong innings, giving up just one earned run. Freeburg got on the board first in the top of the second inning, plating one run. Freeburg was able to add to their lead in the fifth, grabbing another run. In the last two innings, the Hornets offense would come alive. Nashville was able to cut into the lead in the sixth, grabbing one run. After, Hornets senior Brady Bultman kept the Midgets off the board in the top of the seventh, the Hornets came up to bat. In the seventh, the Hornets would get a huge walk-off hit from junior Cody Bauza to give the Hornets a 3-2 win. Bauza hit a walk-off double, his fourth hit of the game.

Anderson went six innings giving up two runs, one earned, walking five batters, and striking out three. Bultman got the win on the mound pitching one inning in relief, giving up two hits, no runs, with no walks and no strikeouts. Bauza led the offense going 4-4 with two doubles, and an RBI. Andrew Kash, Jaris Dalman, and Bultman each had one hit for Nashville in the win.

The Hornets played their second game of the day, later that afternoon as they took on the Herrin Tigers. The Hornets again fell behind early, but battled back for a thrilling 7-6 win. The Hornets started Ryan Brink on the mound, and after a rocky first two innings, Brink settled down to put up zeros in the next two innings. The Hornets were down three runs before they got an at-bat, but battled back scoring two in the bottom of the first. The Hornets were able to tie the game at four in the third after an RBI double from Trevor Meier. The game would remain tied until the sixth inning, when Herrin was able to grab a two run lead. Again, for the second straight game, the Hornets found some magic in the bottom of the seventh. Hayden Heggemeier led off the inning by getting hit by a pitch, moved to second on a single by Bauza, and moved to third on another HBP after Dalman got plunked. Heggemeier was able to score on an RBI groundout by Brink, cutting the Herrin lead to 6-5. The Hornets tied the game at six, as Nick Krummrich, running for Bauza, scored on a wild pitch. The Hornets would then look to Meier to bring home the game winning run. With Dalman at third, Meier executed a perfect suicide squeeze play, allowing Dalman to sprint down the line for the game winning run.

After the game, coach Chad Malawy talked about the two games, “I don’t wanna say we played good baseball all day, but we played good baseball when it mattered. All day when we were in trouble, our brains were getting in our way, making silly decisions, covering the wrong base, or throwing to the wrong base. They did get out of big innings by executing. They got a big double play in the first game against Freeburg,and in the second game we executed some big pitches when we had to, and got some clutch hits.”

Brink pitched four innings, giving up eight hits, four runs, three earned, walking three and striking out four. Brogan Kemp was on the mound for the final three innings, giving up three hits, two earned runs, three walks and six strikeouts. At the plate, Bauza continued his hot streak with another three hits and an RBI. Meier finished 2-2 in the game with three RBIs in the win. Anderson finished with one hit for Nashville. Krummrich although he did not have an at bat in the game, scored three runs for the Hornets. Heggemeier and Dalman each finished with two runs scored.

The Hornets were back in action on Monday, March 28 as they traveled for their first road game of the season against New Athens. The Hornets scored early and often in the match-up being aggressive on the bases in route to a 14-0 win in six innings. Overall, the Hornets stole six bases in the matchup. Heggemeier, Dalman, Brink, Kash, and Krummrich each swiped bases in the match-up The aggressiveness on the base-paths led to early runs for the Hornets, as Nashville scored one in the first, three in the second, one in the third, and three in the fourth. The Hornets put the game away for good in the sixth inning, as six runs crossed the plate. On the mound, the win went to Bultman, as he pitched five shutout innings for Nashville, giving up just two hits striking out eight. Heggemeier came on to finish the game in the sixth, striking out each batter he faced.

The offense was paced by Dalman, who went 3-5 with two RBIs, one run scored, and two steals. Heggemeier added a 2 RBI single, to go along with a run and a steal. Cade Krueger, Bauza, Bultman, Meier, Kash and Anderson each had one hit in the ballgame for Nashville. Carson Parker, Brink, and Krummrich each scored two runs in the win. Cole Pedtke saw his first action of the season, drawing a walk in the game. The Hornets have won four straight games, and their record is 4-2.