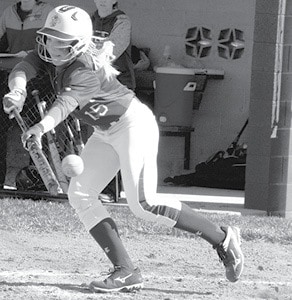 Sophomore Mackenzie McFeron attempts to slap a bunt down the line during the Hornettes 16-0 win over Salem on March 25.

After a rainout on Thursday, the Nashville Hornettes softball team continued their strong start to the season with two more wins as they defeated Salem and Johnston City. The Hornettes record now stands at 3-1 with game this week against Carbondale, Mascoutah, Freeburg, Anna-Jonesboro, and Sparta.

Deidra Holzhauer and Alli Liske pitched a combined shutout for the Hornettes. Holzhauer pitched the first four innings giving up just one hit, striking out two batters. Liske pitched the final inning giving up one hit, while striking out one. Mackenzie McFeron went 3-4 in the game with two runs scored and a stolen base. Paige Kasten also had three hits on the day, stealing a base while scoring four runs. Karly Stanowski also had three hits, all of which were doubles in the win. Stanowski finished with three runs and three RBIs in the game as well. Jordan Stiegman notched three hits, and three RBIs in the game as well. Holzhauer and Brooke Burcham finished with two hits and three RBIs apiece for the Hornettes. Libby Ahlers and Liske each added a hit for the Hornettes.

Holzhauer pitched all seven innings for Nashville giving up four earned runs on 12 hits striking out five. McFeron was the only Hornette batter with multiple hits in the game as she went 2-4 with two RBIs, two stolen bases, and a run scored. Kasten and Stanowski each went hitless in the game but finished with an RBI and a sacrifice. Holzhauer, Ahlers and Liske each finished with one hit apiece in the win for Nashville.