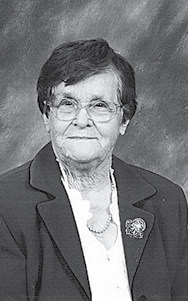 Mrs. Nail has lived in Centralia since 1985 and was a member of the Church of Christ. She was a strong Christian woman who was guided by her faith. She enjoyed sewing, quilting, reading, visiting, gardening, and canning.

Services will be held at 10:00 a.m. on Friday, April 15, 2016 at the Church of Christ on 1640 East McCord Street in Centralia with Minister Stephen Nail officiating. Interment will follow at Greenwood Cemetery in Nashville. Friends may call on Thursday, April 14 from 5:00-8:00 p.m. at the Church of Christ and an additional visitation will be held one hour prior to the funeral service on Friday. In lieu of flowers, the family requests that memorial contributions be made to the “Big D” Relay for Life Team or the Little Egypt Christian Youth Camp. On-line condolences and memories of Myrtle may be shared with the family by visiting www.maczfuneralhomes.com or on Facebook.