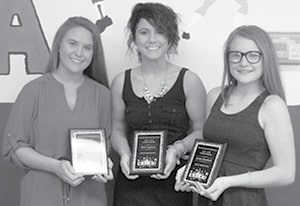 The Nashville Hornets Boys
Basketball team wrapped up
another successful year with a banquet honoring the
basketball players as well as the Cheerleading squad. This year’s team finished 21-11, losing to Breese Central in the Sectional Championship.

The Hornets had a tough schedule this season that featured the Class 2A State Champion St. Joseph Ogden, the Class 2A Third Place team Breese Central, as well as seven teams that won their regional championship.

The Hornets battled through the season, finishing with Nashville’s 30th straight winning record. That is the longest current streak south of Highway 50. The Hornets also were able to grab a share of the conference crown, as they finished conference play with a 9-1 record. Their lone loss was to Pinckneyville.

At the banquet, five basketball players, and three cheerleaders were given special awards for their hard work throughout the season.

ABOVE: The five Hornets seniors hold their awards that were presented to them by Head Coach Brad Weathers. From left to right: Jaris Dalman, Brady Bultman, Royce Newman, Ryan Kell, and Riley Edwards. RIGHT: Three Hornette Cheerleaders hold the awards presented to them by coaches Roxzen Pelczynski and Mary Wilke. From Left to Right: Katie Dalaviras, Alexis Engelman, and Jasmine Karrenbrock