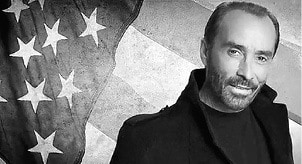 Kaskaskia College welcomes country music legend Lee Greenwood to the Jane Knight Auditorium on Saturday, May 21 at 7:30 p.m. Greenwood will close out the College’s tenth year of the Guest Artists and Speakers Series which has featured 58 acts since its inception.

With seven #1 songs and 25 charted singles, Greenwood’s hits include: “It Turns Me Inside Out”, “Ring On Her Finger Time on Her Hands”, ”She’s Lyin”, “I Don’t Mind the Thorns if You’re the Rose”, “Dixie Road”, “Somebody’s Gonna Love You”, “Going Going Gone”, “You Got A Good Love Comin”, “Fools Gold”, and “Mornin Ride”. Several cross over hits include, “Touch & Go Crazy”, “IOU” and the duet with Barbara Mandrell, “To Me”. An additional duet with Suzie Boggus, “Hopelessly Yours”, was nominated for a Grammy. The CD “American Patriot”, recorded and released in 1992, went Platinum in 3 months.

Greenwood’s latest CD is “I Want to be in Your World”. He wrote three of the seven songs & plays saxophone on the original track, “Here Comes Love There Goes My Heart”. He also covered the Michael McDonald/Kenny Loggins ballad, “You Can Let Go Now.” McDonald is featured playing piano on the song.

Lee Greenwood has won numerous industry awards including, Male Vocalist of the Year for the Academy of Country Music in 1983, two Male Vocalist of the Year awards from the Country Music Association, 1983 and 1984, and a Grammy for Top Male Vocal Performance in 1985 for “I.O.U.”. He also won CMA Song of the Year in 1985 for writing “God Bless the USA.” The song, “God Bless the USA” has been voted the most recognizable patriotic song in America. The singer knows first-hand what it’s like to have loved ones fighting for the freedom of all Americans as his father served in the Navy and the Merchant Marines in World War II. “USA” is now part of the film for Homeland Security that is shown when swearing in new citizens to the United States.

“God Bless the USA” went far beyond what Greenwood expected when he wrote it in the back of his tour bus in 1983. The song has been in the top five on the country singles charts three times (1991, 2001 and 2003), giving it the distinction of being the only song in any genre of music to achieve that feat. It was also #1 on the pop charts after 9/11/01.

Greenwood says; “USA is the song I always felt the need to write”. “I wanted to have something that would unite Americans from coast to coast, and to instill pride back in the United States. The song represents my family, my community and those men and women who have paid the price for the freedoms we all love and enjoy.”

Reserved seat tickets for “An Evening with Lee Greenwood” are $37 for adults with a discounted ticket of $22 available for youths age 18 and under. Tickets may be obtained by visiting the Season of Entertainment Ticket Office in the KC Bookstore across from the auditorium, by calling 618-545-3223, or by visiting the SOE website at www.kaskaskia.edu/soe. Tickets will also be available at the door.

Country legend Lee Greenwood will be performing at the Kaskaskia College Jane Knight Auditorium on Saturday, May 21 at 7:30 pm. Tickets are on sale now.